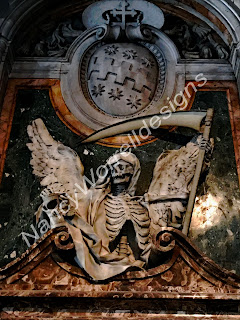 The Winged Skeleton jumped out at me (pun intended). The American tourist that I am, I immediately thought of Halloween!
The skeleton is a Monument to Cardinal Cinzio Aldobrandini and is located in San Pietro in Vincoli (Saint Peter in Chains), a church and minor basilica located in Rome. The Winged Skeleton is a good example of sixteenth-century Italian funerary art. Initially, the symbol of death took the form of a skull. Later skeletons were also added and were created to look natural using ivory-toned marble. These skulls (and skeletons) were accompanied with inscriptions that seem to be designed to remind the living that life is short. The winged skeleton, while not as realistic, was emblematic of the suddenness of death. For example, the engraved skeleton on the façade of the Rome church, Santa Maria dell’Orazione e Mort (Saint Mary of the Prayer and Death), reads, “Hodie Mihi. Cras Tibi.” – “Today me. Tomorrow you.”
Enjoy your coffee today in this cool Winged Skeleton cup  -- who knows what tomorrow brings! And with that may I wish you a Happy Halloween!
Check out my Zazzle Halloween Collection for more fun Halloween products.

You can also find me at