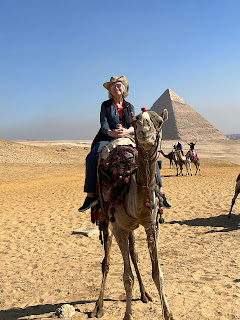 The real surprise was the art in the temples and burial chambers -- the bright colors, the intricate detail.  Art was on the columns, the ceilings, sarcophagi, everywhere! I was surrounded by pictographs telling stories of ancient Egypt.

This first photo is from a sarcophagus that is displayed in the Egyptian Museum in Cairo. Just one of many such pieces. 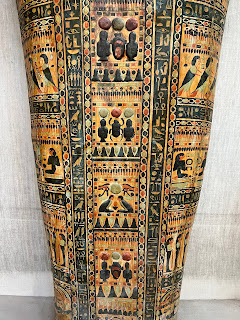 The next two photos are from the burial chambers in the Valley of the Kings in Luxor.

The photo doesn't do justice to the woman on the wall. A guide in the tomb pointed out that the woman has two faces.  If you can enlarge the photo enough, you can see the outline of the second face.  I didn't quite understand what it meant but I did understand that this was considered important in the story.

And in the other photo,  I tried to capture the wall and ceiling -- art everywhere! And look at how vivid these 2000-year-old colors are! 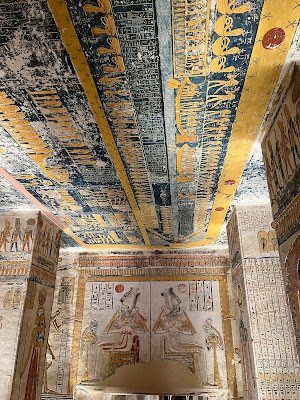 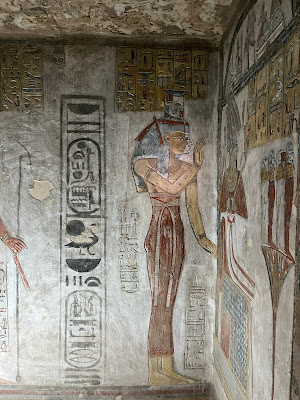 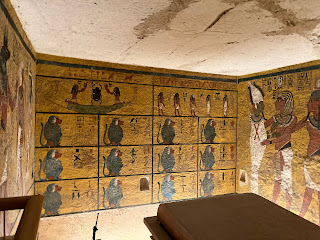 This photo is in Tutankhamun's burial chamber. The back wall of the burial chamber is painted with 12 baboons thought to represent 12 hours of the night.

The trip was a present to myself for my 75th birthday.  Thank you, Self. And thank you, Gate 1 Travel for a wonderful tour. Besides Cairo with it's pyramids and museum, we visited the Aswan Dam location and several of the temples that were relocated when the dam was built.  All very impressive but probably one of the most impressive was Abu Simbel. We also visited temples in Luxor where the Valley of the Kings is located. And last but not least, sunset at the Luxor Temple! 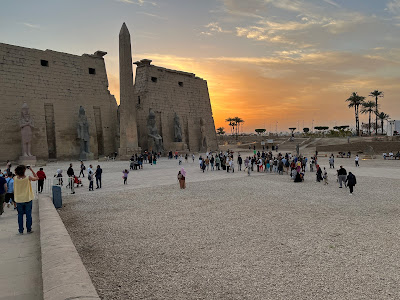 You can also find me at